The Ebola Virus Disease (EVD) outbreak that began in 2013 in West Africa has been devastating on many levels, with prohibitive costs in human lives, economic productivity, and social cohesion. A total of 28 616 confirmed, probable, and suspected cases have been reported in Guinea, Liberia, and Sierra Leone, with 11 310 deaths. Unfortunately, the outbreak is not over; with the latest clusters in Guinea and Liberia, the 42-day (2 incubation periods) countdown must elapse before the outbreak can be declared over in Guinea and Liberia. More so than previous outbreaks, the W. Africa epidemic demonstrated the profound limitations of community health care providers and public health practitioners to manage a crisis of this magnitude, as well as the inadequate infrastructure to relay critical data on incidence, disease burden, and transmission patterns to those national, regional, and global institutions with the capacity and resources needed to mount an effective response. Following the heels of the EVD was the Zika Virus Disease (ZVD) outbreak in 2015. 42 countries are experiencing a first outbreak of ZVD since 2015, with no previous evidence of circulation. Moreover, 13 countries have reported evidence of Zika virus transmission between 2007 and 2014, with ongoing transmission. Based on research to date, there is scientific consensus that Zika virus is a cause of microcephaly and Guillain-Barre syndrome (GBS). In December 2015, Angola experienced its worst Yellow Fever epidemic since 1986. There have been 2023 suspected cases and 258 deaths as of April 26, 2016. China, Democratic Republic of Congo, and Kenya also have reported cases arising from infected travelers from Angola.

These epidemics represent the most recent examples of a world that has become increasingly vulnerable to transnational infectious disease outbreaks. These outbreaks threaten Global Health Security. In fact, a recent analysis (Smith, et al.,’14) reveals that “the total number of outbreaks and richness of causal diseases have each increased globally since 1980.” Not surprisingly, most of these epidemics originate from and have significant impact on areas of the world with poor health care infrastructure and non-existing infection control practices. On the contrary, the last well-described outbreaks of Yellow Fever in the US occurred in New Orleans in 1905 and in Europe in 1821. This troubling finding affirms the need for a cohesive, collaborative network of public, private, and non‐profit partners working across borders and around the world to prevent, detect, and respond effectively to outbreaks of endemic and emerging infectious diseases. The million dollar question is: What is the role of African Diaspora in the prevention and the control of these epidemics? The Ghana Physicians and Surgeons Foundation of North America plans to use its 2017 annual conference to answer this question. 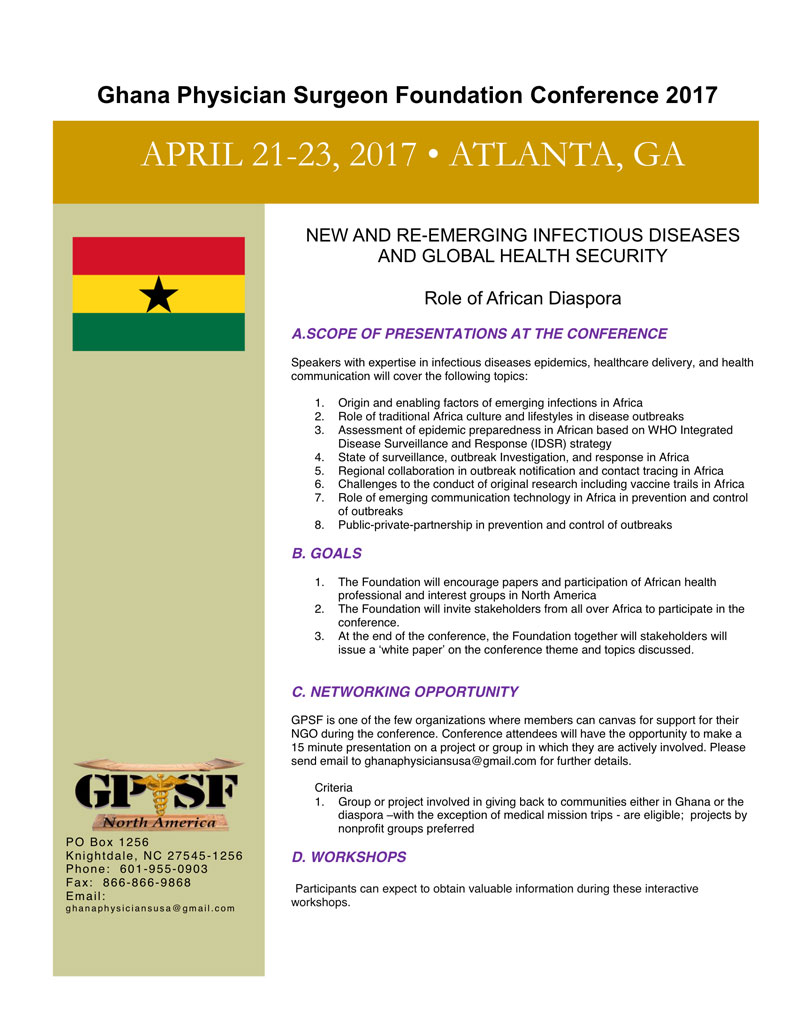 By providing your email address, you consent to receive promotional emails from Imperial Homes. We do not share your information with third parties. Learn more about Imperial Homes’ privacy policy.

Hit enter to search or ESC to close